By: Director
In: Family 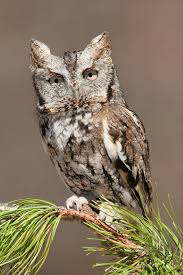 Okay, maybe that’s a stretch — but a Georgia family recently discovered that one of its Christmas tree ornaments was a stowaway from the great outdoors. It had the whole family fooled for perhaps as long as a week.

Last week as Katie McBride William and her two children were finishing dinner they heard a distinctive ‘hoot’ issue from their Christmas tree. Cautiously investigating, the family discovered a live and somewhat indignant owl right smack in the middle of their pine tree. There’s no law against impersonating a Christmas tree ornament, of course, but the family became very upset nevertheless.

They had purchased the tree a little over a week ago, and William speculated that it had been roosting in the tree when they had it bundled up and put on top of their car, and then decided to stick around to see if there were going to be any yuletide mice.

Once discovered, the owl was encouraged to take flight as the family left the living room windows open all night. But the owl didn’t budge.

The next day William contacted the Chattahoochee Nature Center, and an employee came over and got the Eastern screech owl out of the tree and through the window with a piece of raw chicken.

William says that next year the family will invest in an artificial tree, to avoid any more avian hitchhikers.